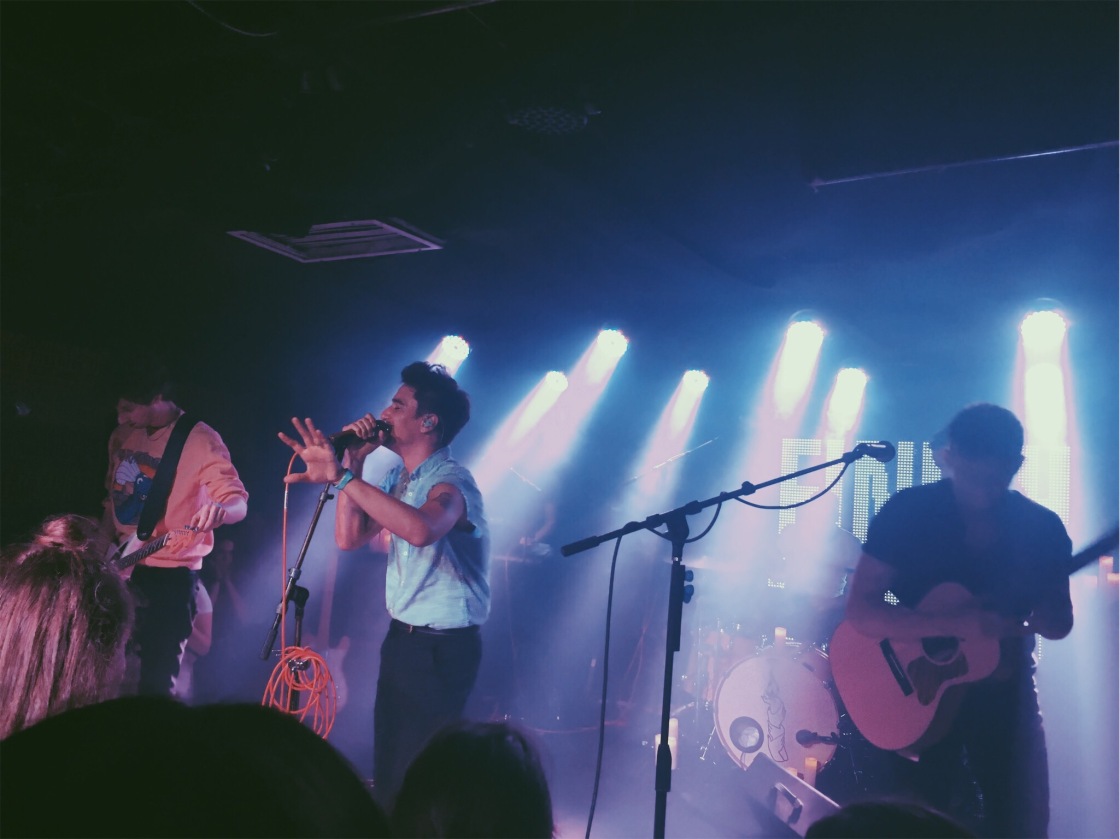 Not Finished Yet: Catching Up with Finish Ticket

When the lights went down, so did the walls between us. The crowd and the band were one force, ebbing and flowing like the ocean’s waves that crashed repeatedly with each lyric. Every word felt like reuniting with an old friend and every pause was filled with the feeling of “why did I ever stop talking to them in the first place?”.

Finish Ticket is the band that has perhaps slipped through your fingers. The Alameda, California group signed with Elektra Records in 2014 after self-releasing two EPs, “Life Underwater” (2009) and “Shake A Symphony” (2010). This signing brought the group into premature stardom, having them open for acts like Twenty One Pilots and The Black Keys. Elektra re-released their album Tears You Apart in 2014 and then their EP, “When Night Becomes Day” in 2015.

Upon hearing all the details of their release schedule and Elektra’s grip on their future, I couldn’t help but feel stifled myself. From a constant game of tug and war with the ownership of their songs to feeling suffocated by corporate claws, the band separated from Elektra Records in 2017. 2018 was spent writing new music and planning their comeback. In November of 2018, the group released a statement revealing that former members, Michael Hoye and Nick Stein had left the band.

It was back to square one.

It is eerie to look back at the vivacious media coverage of the group’s emergence and to see all the dates from 2015. Within years, Finish Ticket had reached near peak success and then suddenly faded away. A group that had opened for some of the biggest names in alternative music had suddenly fallen off of the grid with little explanation. However, when I showed up to Larimer Lounge in Denver only a handful of years later, three hours before the group was scheduled to perform, there was already a cluster of fans waiting outside.

Finish Ticket might have taken a hiatus, but their fans didn’t even bat an eye.

When I asked Brendon Hoye, lead singer of the group, what kept the band inspired enough to keep writing music after the debacle with Elektra Records and the few fanatic years of fame, he revealed, “We still have these letters that our fans wrote us from years ago about how our music helped them in their lives. It’s sort of like a reminder of our impact. It takes us back to what is really important.”

This is precisely the sincerity that is the fuel for Finish Ticket and is what’s launching them into an entirely new era of creation. There is no expiration date on passion. With their two new singles, “Dream Song” and “Ceiling Won’t Break”, it is clear that the band still maintains its charisma, enthusiasm, and talent. However, with heavier, more intricate lyricism, Finish Ticket is opening the floor for more sophisticated discussions about topics like relationships and depression.

Drummer, Gabe Stein commented on what the future of Finish Ticket is going to look like, stating, “Well now, we don’t have anything to be other than us. We can finally create the songs that we want and not have to worry about much else.”

The trio seemed to have a collective attitude regarding the future: this air of “well, why not?”. Passionate about using their platform to create music that not only promotes discussion about relevant topics, but also creating more honest and forward music, Finish Ticket maintains a well-rounded and positive outlook for the future.

Finish Ticket released an accompanying music video to “Dream Song” in August, directed by Brittany O’Brien, an acclaimed photographer in the scene. Far more intimate than their previous, highly produced videos for “Color” and “Tranquilize”, the video is concise, impactful, and drives home the concept about the complexities of toxic relationships.

The ambiance around the members is dismal, with the only light source stemming from a line of candles. Hoye is pulled and touched my random hands as his eyes remain locked on the lens, like he’s trying to retell a story of his past, while being fully removed from it. Remaining members Alex DiDonato and Gabe Stein are pictured in front of seven candles that are progressively blown out throughout the video. Towards the end, DiDonato tries to save the last candle from blowing out, probably insinuating how draining a toxic relationship can be and how the last candle is essentially the last hope of having the strength to leave the relationship before it kills you. This video, both conceptually and cinematically, paves a new path for Finish Ticket right back into the independent scene. A path that is untouched by overcontrolling record labels and insufferable expectations to be like every other formulaic pop band.

“The video was another way for us to connect to our audience. Something to kind of say ‘we’re back for good’,” DiDonato said excitedly.

It is not the new music, the accompanying videos, or the promise of future projects that makes Finish Ticket as magnetic as they are. Rather, it is the pure, unbridled passion featured in their live performances.

As I stood in the small crowd that filled only half of the venue, every conversation I (intentionally) overheard followed the same format of:

Typically, these kinds of comments at indie concerts are laughed at and can be spotted a few cuffed jeans away, but this time it felt different. The audience glowed with a sense of loyal pride that fed the trio on stage. Hoye’s aggressive hand gestures and facial expressions brought the songs to life and had nearly every person so engrossed in his mannerisms, the music was a mere second thought. DiDonato was hunched over, head hung, with his eyes shut, so involved in his instrument, it was like the audience was watching a public performance of pure catharsis. Stein nailed on his drum set like it was the last time he’d ever be able to, melting into every collision of stick and plastic. Together, the group had this undeniable vibrancy that seemed to empower every person in the room.

Their eyes watched the crowd carefully after announcing what song was going to be played next. Each was greeted with an eruption of cheering that in turn, spread grins across the group’s faces as they performed old and new songs interchangeably. The crowd met them with open arms, each and every time.

Although their new releases and tour are being branded as a monumental “comeback”, the truth is, the band never took a break. The time off was spent learning about how to re-articulate their message in their most honest and genuine way, and learning about the roots of creation once again. Fans didn’t “survive a hiatus”. They stuck with a group whose passion and dedication is everlasting.

Finish Ticket is not the band that slipped through your fingers. They are the nail polish you can never seem to fully wash off.
Until next time,
Rocka out.