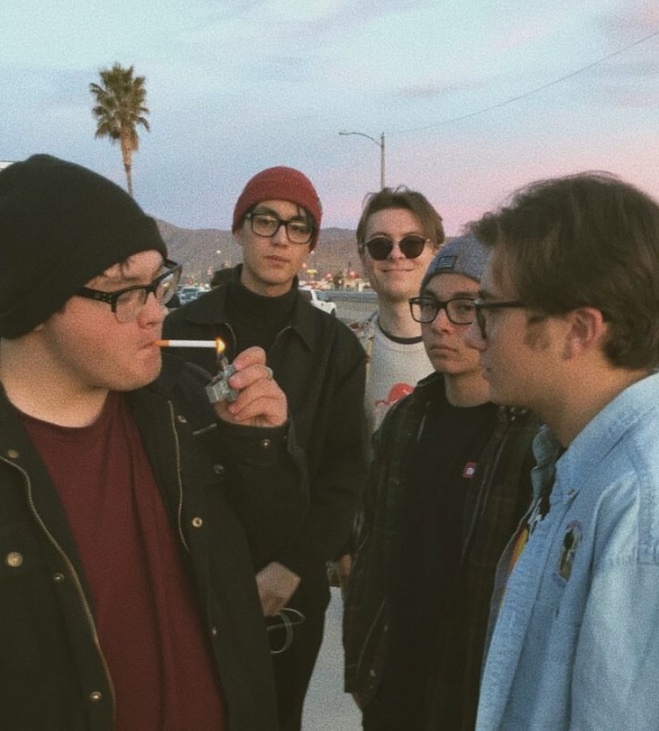 Lavender Kissing With the Licks

“So tell me about your song, Lavender Blood,” I enthusiastically said over FaceTime to the group of young men piled in a messy bedroom. Immediately, Paul Haston burst out laughing and left the frame. I had no idea who these random guys were, and I had already embarrassed myself. Nice!

“The song is called Lavender Kiss, not Lavender Blood,” Thomas Bateman said, laughing. I was utterly mortified when I looked at my notes and had their one and only song written down with the wrong title. I am supposed to be a semi-serious music journalist, trying to make her own magazine. I couldn’t even take proper notes? Yikes.

The group quickly reassured me that everything was fine and that we could proceed in the interview. Despite the rocky start, The Licks proved to be a sarcastic group of guys with an undeniable charm that I couldn’t get enough of, and I don’t think you’ll be able to either.

Sprouting from Hesperia, California, the Licks is composed of Thomas Bateman, Paul Haston, Jimmy Rogers, and Chad Zappia. With a bit of messing around and throwing out various names referring to parts of the body, the group settled on “The Licks”, a simple title with hints of mystery. Having only been formally assembled in September of 2017, The Licks have one single out now called “Lavender Blood”… just kidding, it’s “Lavender Kiss”.

“Lavender Kiss” traces what love is. I know, a big topic to tackle in four minutes and four seconds. Zappia says that listeners often try and give the song more meaning than it actually presents. However, he goes on to say that if they were going to try and approach such a complex topic, they had to take it all the way back to what is man and woman. What makes attraction special and what brings people together? The deeply sensual song is laced with smooth bass and angsty, but gentle vocals.

“I just want you to want me” is repeated throughout the song consistently, setting the scene for the rest of the song to be built upon. This is a simple idea that almost all humans share, and The Licks have an interesting approach to it. The song begs for attention, as the lyrics are desperate for the affection of someone. The listeners feel the statement in their bones and forces them to question who their man or woman is. The Licks have created a song with lyrics that make every listener feel like a part of the song, as if they were there writing it with them.  Zappia says the title came from his ex’s lavender colored lipstick. The pair of lips broke his heart, so it was his turn to lick away the color from his.

The Licks, as described by Bateman is, “Whatever we feel like. We’re indie punk or mellow indie, our sound is hard to put a finger on I guess.” I can wholeheartedly agree with this statement, as no term that I’ve found has quite suited The Licks and their sound. Bateman also detailed similarities to the Cure, with the heavy emotion enclosed in simple sounds that everyone can understand. The Licks strive to make music that makes you think, but doesn’t let you get caught up in all the details. It poses questions and doesn’t give you any answers, making you create your own. Their music thus far is invasive in a welcoming sense, as it just seems to walk into your head and refuse to leave.

I was entranced by “Lavender Kiss” and you will be too. In the next year, The Licks will release an EP of four to five new songs, predicted to come out in July. After that, another single should be released followed closely with a potential tour in the surrounding cities Hesparia.
Keep The Licks on your radar. Until next time, Rocka out.

new playlist, “Jaded” up now! threw together some tunes I’ve been listening to. link in playlist highlight ✨
The Creep Effect — new Rocka Rambles out now! Link in bio.
The new Rocka Magazine logo! I’ve been so excited to finally share my new designs by the lovely @liftyourskinnyfists.
aug 1st I’ll be back online! you’ve been warned! ✨
Let’s have a chat about gatekeeping music & why we feel like “our” music is really “ours”! New Rocka Rambles live now ✨
“library parking lot” is a collection of tunes for when you’re stuck in a place you don’t want to be. Physically, mentally, spiritually— whatever. We’ve all been there. Link in bio & in stories!
%d bloggers like this: